Towel Day and a New Book

Huzzah for Towel Day, and what could make it better than a new book (except for maybe a new book by Douglas Adams.)

While the parenthetical is impossible, the new book that came to me was simply the latest anthology that my work appears in.  I was very excited for this contributor's copy as there are a lot of fine authors in here.  How disappointing then, it was, to retrieve a large envelope from my mailbox only to discover that it is indeed from Wicked East Press, but the envelope is torn.  Carefully, I opened the envelope in the conventional way to pull out the book.  It's nice and shiny.  But as you can probably not see from this shot, the bottom of the cover is bent, with a small crease.  It is not damaged enough to consider it destroyed. 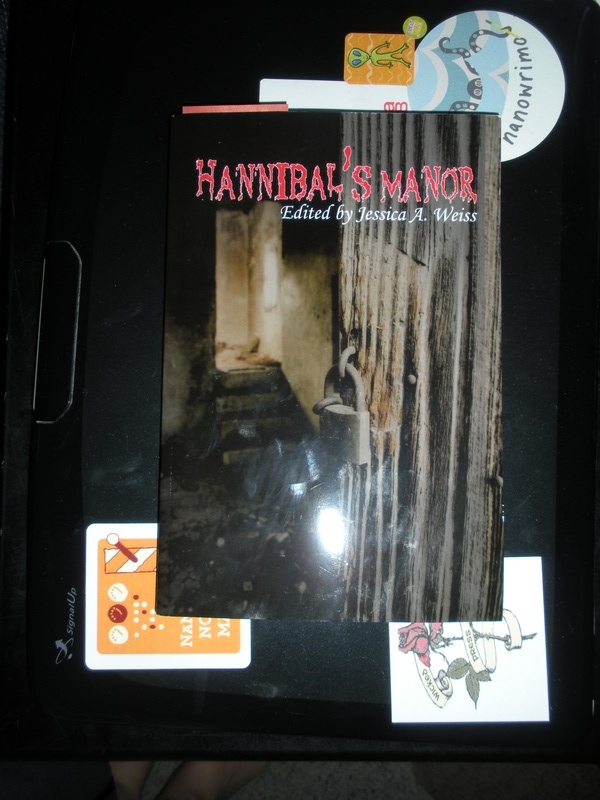 Here's a shot of it from the side, and yes, I stuck in a tight place in my bookshelf for the night to see if it would flatten out.  No I haven't opened the book except to show my husband the location of my story.  (Second one to the last, :D) 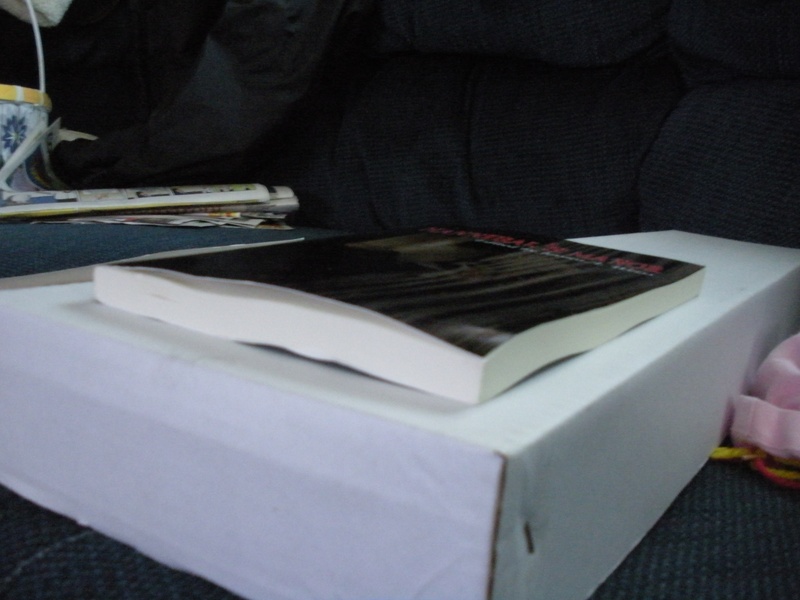 I'll admit that I fold the covers of my books when I read them, and I even bend the binding.  My point here is that I buy my books (well, get my books) in good shape and mangle them myself as I voraciously devour their tasty insides.  I am disappointed in our postal system and must add that this makes me leery to send out my book anyone.  However, that said, you will get my book supported by at least one piece of cardboard, in a ziplock back, tucked into a bubble wrap lined mailer.  Paranoid?  Perhaps. But that's the way it goes.

On to the rest of the day.  To explain Towel Day, you have to at least have heard the name Douglas Adams, and perhaps be familiar with the movie The Hitchhiker's Guide to the Galaxy.  There are books, too, and a radio show, audio books, an old movie, etc.  To be sure, Douglas Adams was one of the best science fiction/comedy writers I have ever read.  I was devastated by his death.  But his fans have rallied!  And Towel Day was begun in his honor.  I haven't really participated before, but this year, I decided, what the heck.  I loved this author and carrying a towel is a small tribute.  If you are really interested, you can read about it on the wikipedia page, here.

My observance started out with a shower, where I thoroughly enjoyed toweling off.  Then, since I had to work that night, I hung up the wet towel and took a dry one to the couch, where I covered up and took a nap in anticipation of a late night. 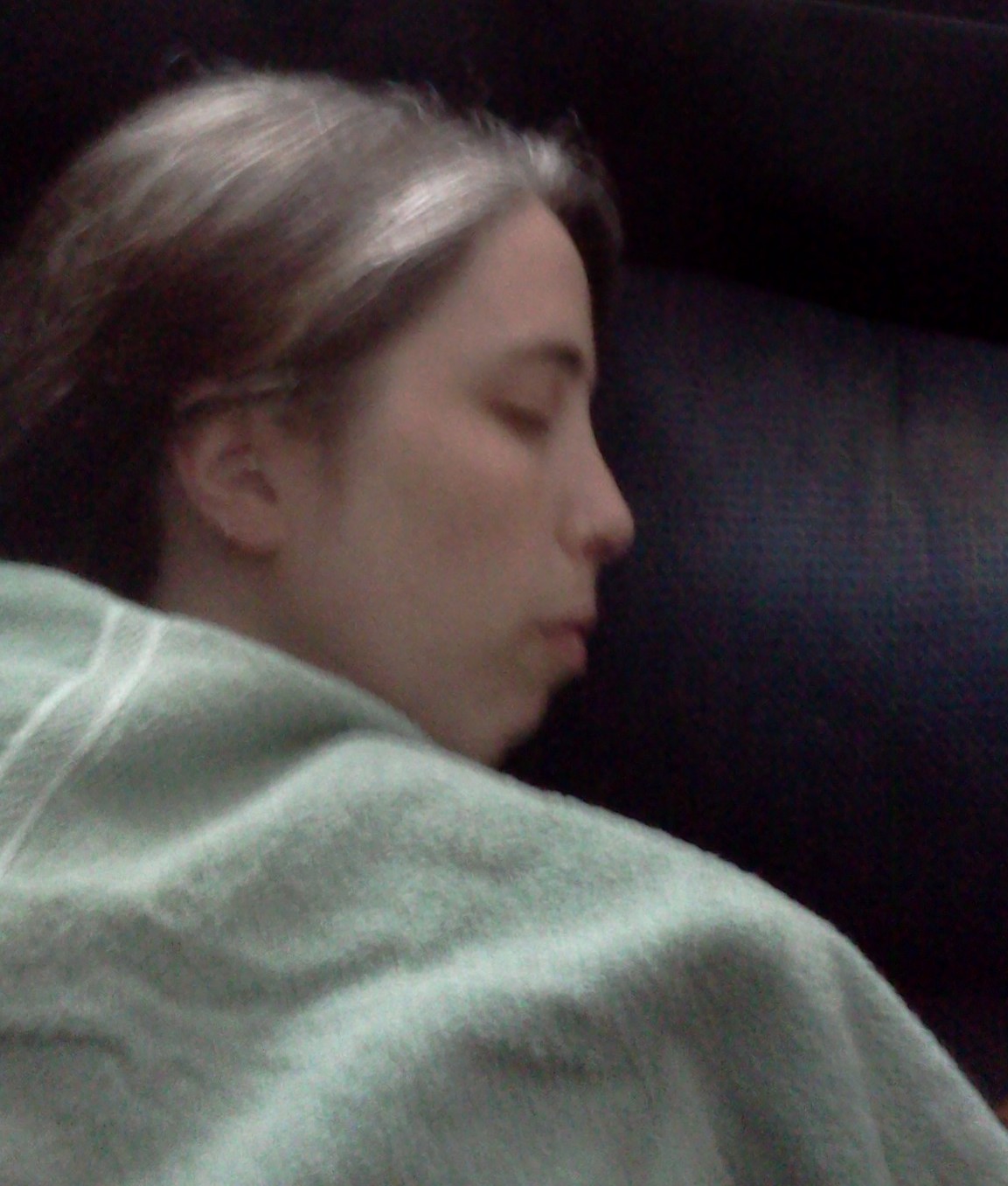 If you know me at all, even through this site, you know that everything I do, practically, I add a squishable element.  So of course, Cerulean is reading The Hitchhiker's Guide to the Galaxy to the rest of the Squishable gang, while sporting her dragon towel. 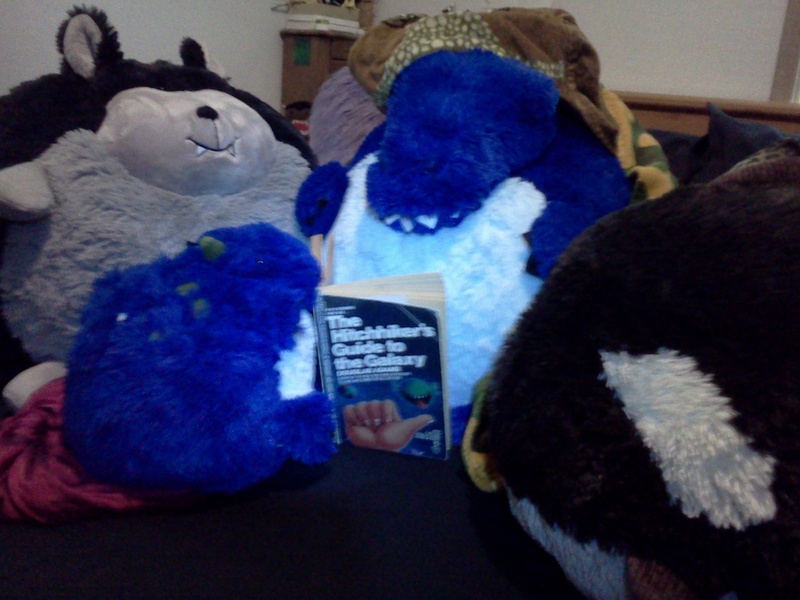 Then it was off to work.  Well, I've got two things stacked against me for truly sporting my Towel.  One, I'm a cleaner, in offices, after hours.  Not much opportunity to share why I'm carrying a towel.  Two, I'm a cleaner.  It's really not that unusual to see me at work with a towel hanging out of my pocket.  If that makes me an ideal candidate for trans-galactical hitchhiking, then sign me up.  I'd even hop the next Vogon ship out of here as long as the Heart of Gold could pick me up, no matter how improbable that is.  Anyway, here I am, taking my own picture (lame I know, but what's a lone cleaner gonna do?) sporting my towel, and um, my towel. 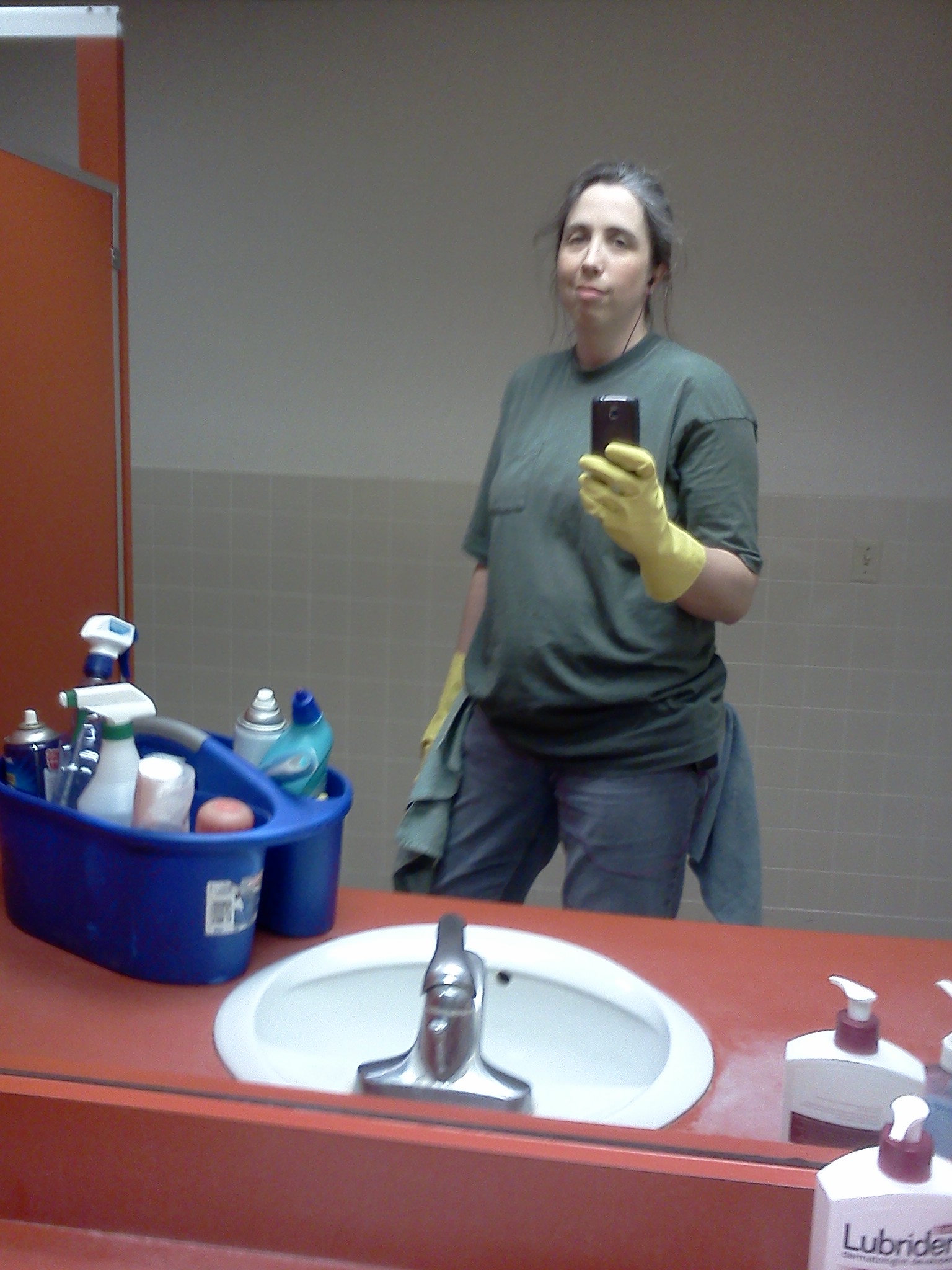 My day came to an end about 12:00 am, so it was a full day.  Took me a half hour to get home, then another half hour to get lunches ready for the rest of the house when they wake.  Then, Lord help me, I wasn't all that tired, so I got on facebook.

It turned out to be fortuitous though, as my son came out of his room needing a tissue.  What turned into maybe ten minutes online, became about forty-five minutes of getting him to the bathroom, medicated, kissed, and back to bed.  Of course I also kissed my sleeping daughter and put my own pj's on.  Then I finished watching the video I had started.  All in all, I got to bed about 2:00.  Typical night.

My writing isn't suffering too badly.  I'm still editing Between a Rock and Oblivion.  I'm also wondering how The Magic Key would look as a novella.  And of all things, my mind has begun picking actors for the roles in The Other Side (no it hasn't been optioned.)  I'll be listing them on my facebook page, so https://www.facebook.com/JensBooks" target="_blank" rel="nofollow">follow me here, I think some of them might surprise you, that is if you've read the book.  If you haven't read it yet, why not?