Why is it that there are no real results when this phrase is entered into the search bar? Oh sure, you get boy shorts for girls as well as every other Hello Kitty thing.  Oh you get this boy in a hoodie. 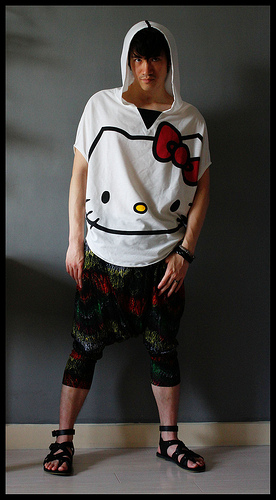 But then you get men pictured, not littleboys.  Men modeling men’sunderwear. 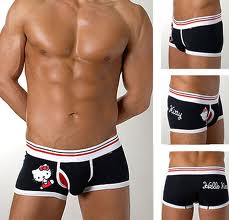 My son and I were in Target about a week ago now,and he turned to look around as he always does and suddenly his eyes lit up.  “Mom!” he exclaimed, “Hello Kitty!!”  And also, like he always does, he ran off toward the Hello Kitty display.  When I caught up with him, he was tugging on a shirt. “Leave it alone,” I said, “this is the girl’s department and you can’t have that shirt.”  He looked so disappointed.  “But mom, do you know what this shirt has?”  Shaking my head, I looked at the picture. 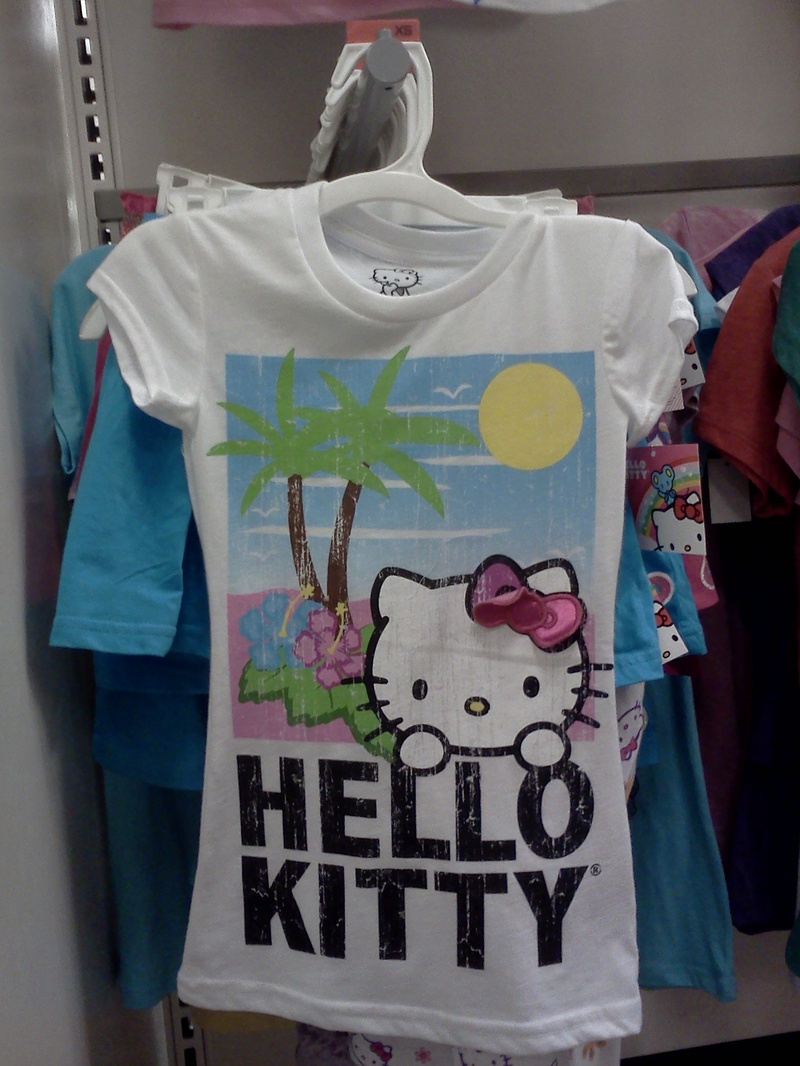 Hello Kitty was sitting on a beach with a big yellow sun behind her, so I said, “A big yellow sun?”  He shook his head and pulled me down closer to him.  “Kitty has a real bow.”  I looked again, and sure enough, a separate piece of fabric, shaped like a bow, was sown over the bow on Kitty’shead.  “You’re right, very cool.  You still can’t wear this shirt.  It’s shaped for a girl’s body.”  Then, stupidly, I actually went to the boy’s section to see if they happened to have any Hello Kitty boy’s shirts.  Of course, they did not.

So my issue here is simply a matter of what is proper for gender identity?  Because my little boy likes Hello Kitty, does mean he’s not firm in his identity as a boy?  I don’t think so.  In so many things, today’s society is so modern, but in so many subtle ways, we are still in the dark ages.  I’m not making my argument for or against gays or gay marriage here, I’m simply stating when is it okay to like something that is traditionally for the opposite gender enough to want it, to do it, to enjoy it.

Hello Kitty is a small white cat with red overalls and a red bow.  What is specifically feminine about her?  Well, she’s a girl.  She wears a hair ribbon, and she likes to garden.  What is more universal about her?  She wears red overalls, pants, not a skirt.  She likes to dig in the dirt and garden.  She likes adventure and having fun.  She likes meeting new people and doing new things. So, would it hurt the industry, Sanrio, to make Hello Kitty shirts in a unisex shape?

My daughter has several Hello Kitty shirts as well as a couple of Hello Kitty DVDs.  She has a few things with Hello Kitty’s picture on them, toys, stationary, etc.  My son loves it all.  She’s 13 now, and almost grown out of Hello Kitty.  She’s in love with Michael Jackson, and yeah, that could take another whole blog.  But she can get a Michael Jackson shirt and no one will look twice at her except to say “Nice shirt.”

My son is 5. When I brought this up to my husband, he said, “But Hello Kitty is a girl thing.”  Why?  Because she’s a girl?  I wish I could say at the time of this blog that I’ve found a unisex shaped shirt for my son.  I haven’t, but I’m wondering if maybe Hot Topic may have something that would fit him. Suffice it to say that I have determined to find him a Hello Kitty shirt, if only because I’ve only seen girl shaped shirts.  There is nothing wrong with my son wearing Hello Kitty.  Although, if he wanted a Hello Kitty sun dress… I think that would also be an entirely different blog. 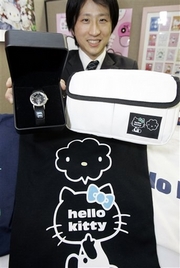 A  few years ago, Sanrio thought about putting out a line of Hello Kitty products for boys. What happened to that? *I just found out this line is available in Tokyo.*  Next time I touch on this, I hope to say that my son is wearing a Hello Kitty t-shirt and loving it.