Because I Work for Morons, Does That Make Me a Moron, Too? pt.2

Forgive the spelling mistakes you may find, the dangling participles and the preposition endings, this blog is being written directly here.  Usually if I have something I really want to make an impact with, I write in Word, tweak it, fix it, and then paste it here.  However, this blog is about a week late, and I have no patience to do it right.  I apologize.  Stupid morons (at the daycare.)

So I have actually posted pictures in the photo gallery already, if you really want to see all of the wretchedness that was the daycare.  First of all, though, I have to say that I may have been a moron for putting up with them, but I have a chance to redeem myself as we have lost the daycare account.  It was through no fault of mine, apparently my boss couldn't get the wax on the floor right. (And they were highly particular about their floor.)  They told him they would try someone else to get the floor right, but if it was the floor and not the man, we may hear back.  We haven't heard back and it has been almost two weeks.  Just to give you an idea of the floor, here's a picture. 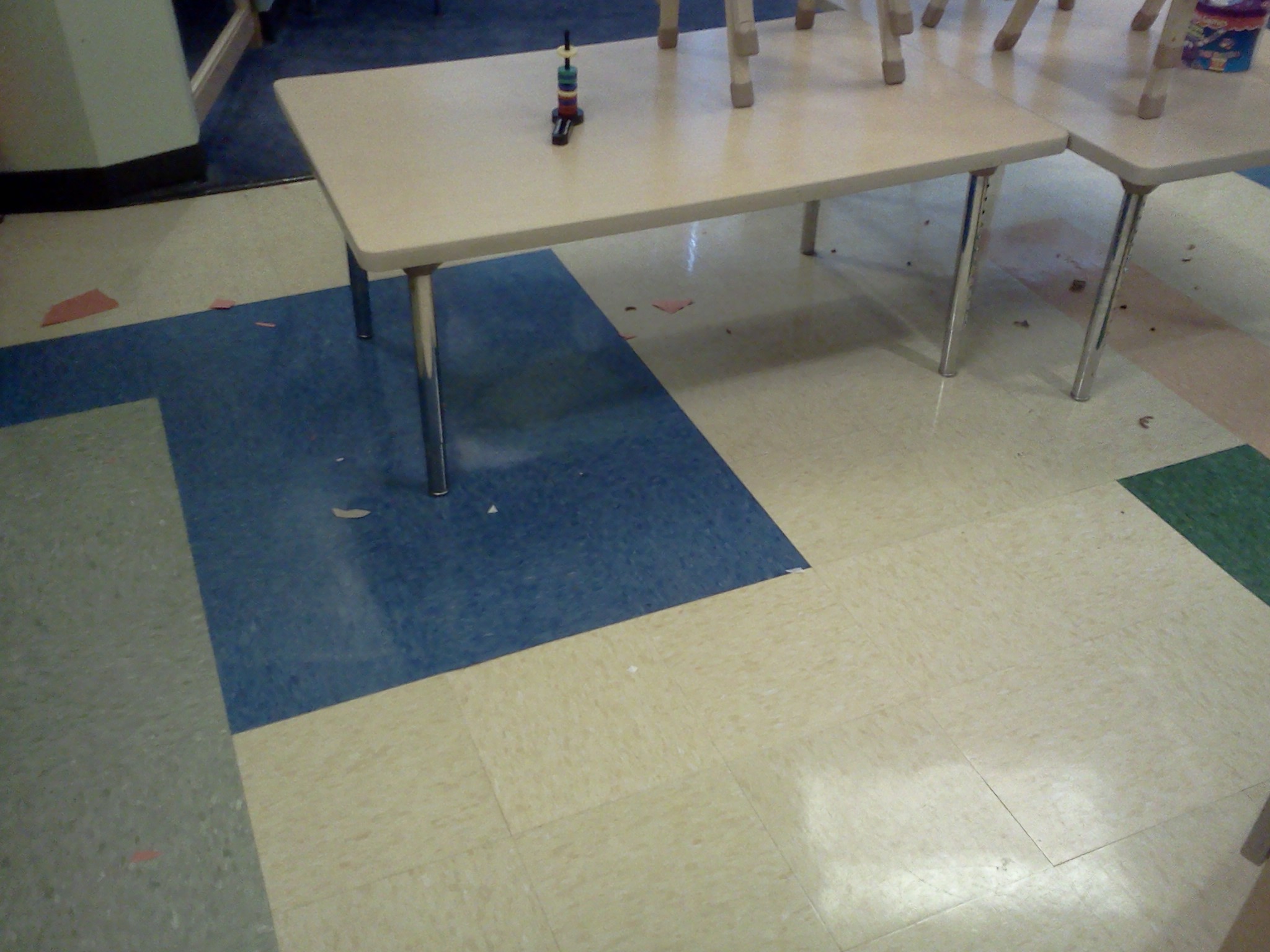 Oh, sorry, that's the preschool mess I have to clean up.  But as you can see, the tiles are waxed.  Scraping up dried mashed peas also scrapes up wax.  Not my fault they didn't clean up their mess while it was still fresh, still wet.  This picture looks like they didn't have a broom available to them, but yes, they did.  They just left this mess for the cleaners.

Secondly, every night I went to work, I had to get into the "What moronic thing will I find tonight?" mentality or be completely floored by the stupidity I did find.  For all of their issues, the infant room was a no shoes, no socks room, so I have to put on surgeon booties to clean in there.  Yes, I just wore them all over the place, even outside if I had to run to my car.  The did complain once that the floor in the infant room had dried food stuck to it and also that the toddler room floor hadn't been cleaned at all.  That was the beginning of the headaches.  Mind you, this place was only contracted at 3.5 hours a night to clean, but they frequently left me with 4 hours of mess.  I found the refrigerator open once, the toilets unflushed, and the water on on different nights.  You can find examples in the picture gallery.  The most recurring issue was that of the preschool/toddler bathroom.  I wondered if they even supervised these kids in there.  I mean, these kids were worse than kittens. 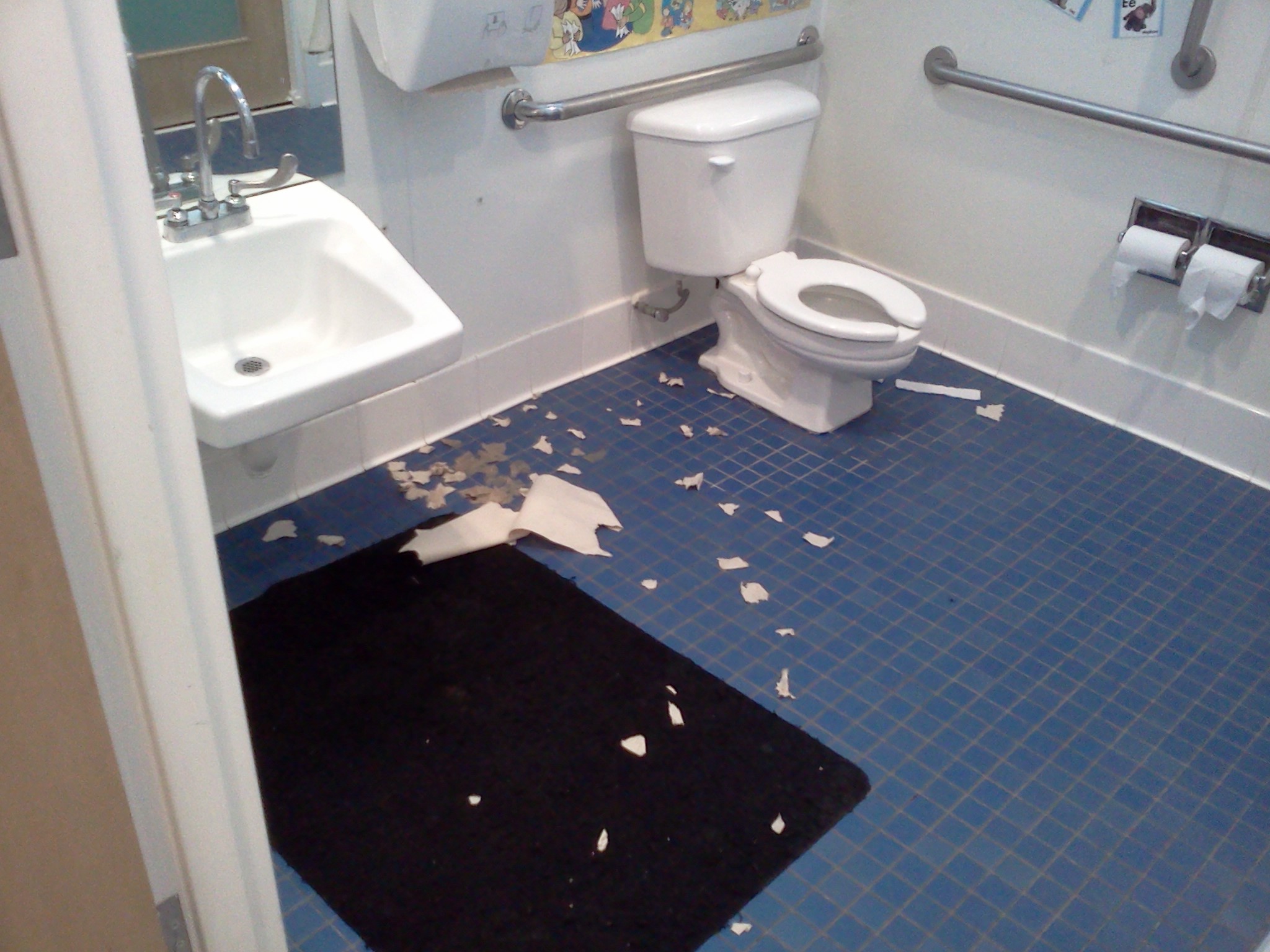 Not only did they leave it like this EVERY night, they left the toilet unflushed more than once, and a couple of times it was because they jiggled the handle so hard the chain fell off the lifter (in the tank.)  So yeah, I had to take the cover off the tank, reach in (yes with gloves on,) retrieve the chain and put it back on the lifter to flush the toilet.  The daycare personnel couldn't figure this out?  Morons.

Also, and this is in the comment for this picture, but they had a corn syrup painting.  My daughter did one of these in preschool.  They're kind of cool, but THEY NEVER DRY!  We enjoyed it for about a week and then threw it away.  These people hung theirs proudly on the wall... ABOVE THE BATHROOM DOOR!  Morons.  Here's the progression: 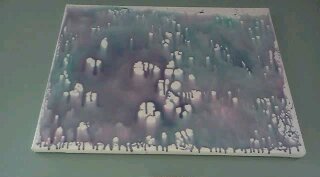 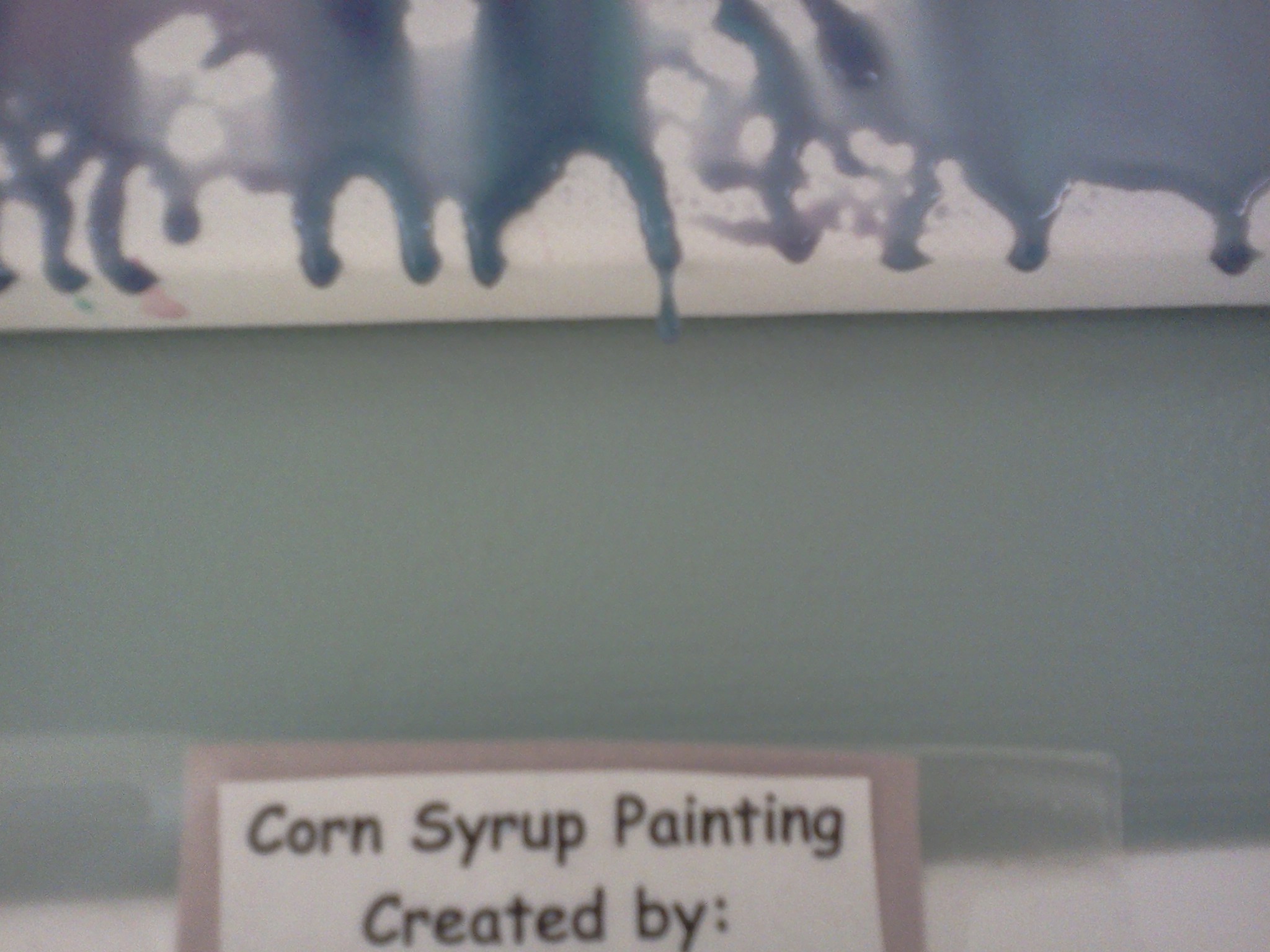 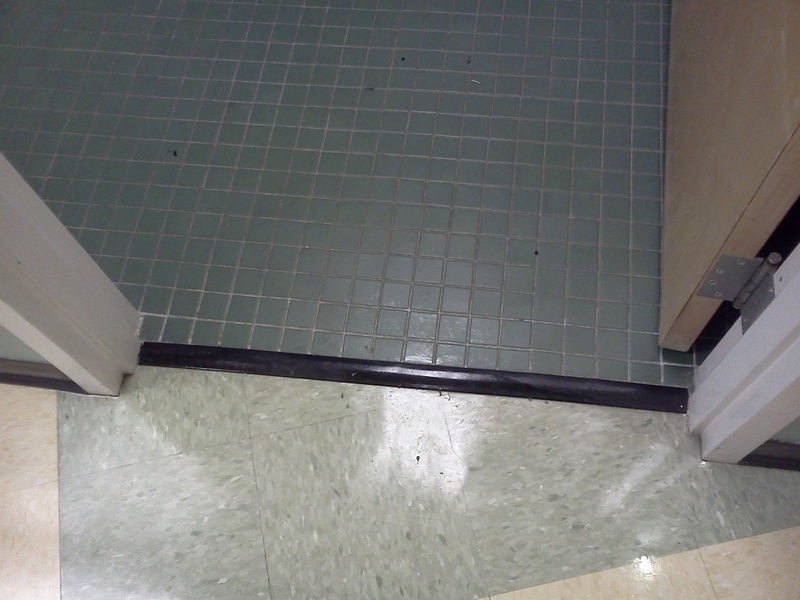 If you can't really tell, there are several drops of corn syrup on the floor.  These don't come up with mopping.  These have to scraped up, yes, taking up layers of wax, or more likely, leaving behind a sheen of corn syrup on the floor.  I am happy to report that after about two months of display, they finally threw it away.  I believe it was after a particularly humid week and the painting actually dripped on one of the kids, I'm not sure.  For the most part though, you don't see these paintings drip.  Like the Weeping Angels, they drip when you're not looking, but look fine when you stare at them.  Whatever, morons.

I think my main issue with this account (but not anymore since I don't go there now) was simply this: What was my job and what was their job?  Were they (are they) raising privileged children who expect that someone else will clean up after them?  Was it my job to clean up their messes as well as making sure the place was habitable?  I was under the impression that I come in after hours, clean the bathrooms (not clean up the bathrooms,) clean and disinfect the various children's rooms, vacuum and clean the floors.

I have to say the worst, and nearly the straw that broke me, was the note that a child had vomited and could I spot clean the carpet under the blue blankets.  I remember when I started with my boss he asked me if I had any issues with cleaning.  He was impressed that I had no problems cleaning men's toilets and collecting trash.  I told him I might have issues with diarrhea or vomit.  What's funny is he shook his head then and said, yeah, he'd have a problem with that too and we would most likely not encounter any of that as that would be the owners of the account's job to clean that up. Ha ha ha, who's laughing now?  I cleaned it but held my breath as much as I could and used almost a full can of Spot Shot.  But I refuse to clean up vomit unless it belongs to one of my own children now.

The second major issue is actually two-fold.  First, they had a box delivered.  I'm not sure what was in it, but it was packed in styrofoam bricks.  You know what I mean, the packing bricks your stereo or alarm clock is packed with to keep it safe.  Well, the kids shredded these bricks and the resulting beads were impossible to clean.  It took nearly two weeks before they were all up.  I seriously believe these kids, the school age kids this time, enjoyed having an aspiration hazard lying around.  That said, the week before I was let go, they had a TON of tiny ball bearings all over the floor.  I had no idea what broke or where they came from, but they hated the broom, as well as the dust mop and the vacuum.  It took a few days to get them all up, and I let the daycare know to look for them.  Not only were they an aspiration hazard, but a falling hazard.  I didn't want the children to get hurt by slipping on them.  Of course, why should I care about a bunch of children being raised with out the life skill of cleaning up their messes, children being raised to say "Oh, that's all right, the cleaner will get it."?  I wash my hands of that account.  Good-riddens and huzzah, I now can recover my lots wits and move on.

The other side of that coin is now I'm working about on third the hours I had and I'm worried that I may not be able to pay for my car.  So, please, buy my book, and tell your friends and family to buy one too.  Support a starving artist.  I may put out my midgrade novel after this, just in the hopes that I might recover some of this lost income.  But who am I kidding?  Mostly myself, it seems.